For Patients
Get Started
See More

When to Walk Away From Sexless Marriage

A sexless marriage can be challenging for any relationship. Learn how you can work through your marital issues and restore intimacy. 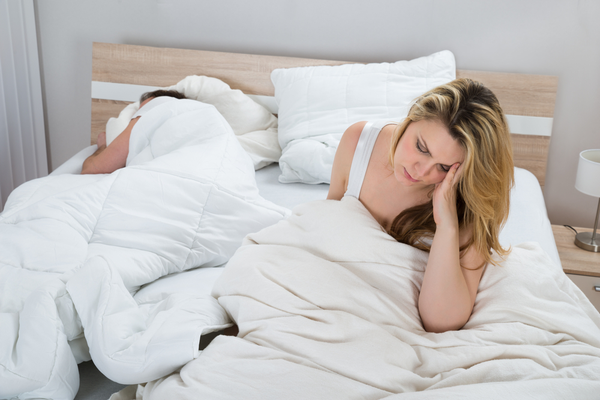 There is nothing quite like the beginning of a relationship. Commonly referred to as the honeymoon phase, the infatuation and intensity during this time almost feels like being “high” on love. Everything is new and exciting, passion is high, and the physical desire is through the roof. However, as this phase winds down, sex drive lowers, excitement wanes, real life sets in, and some couples start experiencing problems in their bedrooms. But is it time to try therapy matching service for sex therapy just yet?

Over time, as their lives become fuller, busier, and more complex, many couples tend to attach less weight to their sex life when there is so much more between them. While it is common for spouses to become less intimate with each other within the first few years of their marriage, no physical intimacy at all may be a sign that the relationship is in trouble.

How do you know you are in a sexless partnership? Why am I never in the mood for sex? Can a marriage survive without intimacy? Is divorce inevitable if you and your spouse do not have an active sex life? This article will attempt to answer questions that bother most married couples experiencing issues in their sexual relations.

How can you tell if you’re in a sexless marriage?

What is a sexless relationship? There are many ways to define a sexless romantic partnership, most of which focus on the regularity of physical intimacy. Though, it is more productive to concentrate on the significance of the misalignment of desire in both partners.

If one spouse wants to be physically intimate every single night, and their better half has a cadence of two or three times a week, such marriage cannot be called sexless. However, if one partner wants to have sex daily and the other one only a few times a year or once a month, at least one spouse will likely view the marriage as lacking physical intimacy.

One of the top issues that present in couples and sex therapy is a difference in levels of sexual desire. A discrepancy in desire is normal, but sometimes couples will struggle with conflict or avoidance around sex if they don't manage that difference together. Sexless marriage, generally defined as having sex fewer than 10 times a year, is the extreme result of difficulty navigating differing sexual interests between two people.

As you can see, the definition of a sexless marriage isn’t entirely black and white. If you cannot say for sure if your partnership is sexless, it does not necessarily mean it is or it isn’t. Labels aside, there are still likely issues in your sex life that you need to deal with, and it is important to work them out if you’d like to remain in the marriage.

Do all sexless marriages end in divorce?

A sexless marriage doesn’t always need to be grounds for divorce, but it can be a deciding factor. It all depends on how important sex is to each partner and how much work has been put into solving the issue as a couple. Some couples rarely or never have sex, and both people are totally fine with that. There is no normal or healthy level of sexual desire or activity, so if the current frequency of sex is working for both people and fulfilling their sexual needs, there's nothing to change or worry about.

In a relationship where at least one person is unhappy with amount of sex, there are several steps you can take to address the issues before resorting to divorce. As with so many other reasons to end a marriage, it's worth trying to improve it first.

Before considering divorce, it matters what the reason is for the decline in sexual activity. If it’s because one person has become ill, disabled, or otherwise unable to be physically intimate, that's a very different circumstance than your partner being unwilling to engage with you sexually, or losing physical attraction. Changes in sexual functioning can still allow physical intimacy, even if it doesn't look like it used to. And, you may need to reevaluate your definition of what constitutes sex.

Another factor to consider when contemplating a divorce is how the lack of sex in your marriage is related to other issues between you. Sexlessness is rarely an isolated issue. The lack of sex can often be a result of resentment, anger, and frustration in other areas. Being upset and constant fighting are not particularly seductive. Sometimes a low libido can be because something is getting in the way of emotional connection. Those issues should be addressed before tackling your sex life. Making changes to improve your overall relationship health usually has to happen before sexual intimacy can be created in a relationship.

However, it could be as simple as spouses understanding the different amounts of intimacy to fulfill their needs, and coming to a compromise. While some are convinced that they have a healthy sex life and love life, their partners may feel like something is lacking. One of the hardest parts of being in the relationships is communicating your needs and finding out the ones your partner has. Therefore, it is best if you and your significant other talk everything over before one of you starts preparing for divorce due to sexless marriage.

What is sex therapy?

Sex therapy is a specialization of talk therapy that focuses on sexual health. A sex therapist can be a psychiatrist, a marriage and family therapist, a psychologist, or a clinical social worker who is specially trained in sex therapy methods beyond the minimal amount of training about sexuality that is required for each of those licenses.

In other words, seeing a sex therapist is like going to a gynecologist for gynecological problems rather than to a family practice physician. It’s the difference between seeing a specialist and a generalist. That isn't to say that a therapist without specific training in sex therapy wouldn’t be helpful or beneficial, but finding a therapist who’s main focus is sex will be the most effective.They really do specialize in sexless marriage advice.

Sex therapists have a particular awareness of sexuality that rises above personal opinion or personal experiences. They are trained in several ways to treat a particular issue and tailor treatment to the patient. There is an actual sexological method to treating sexual issues. With the exception of when separate sexual surrogate therapists are added (in a very small number of cases), sex therapy is completely talk therapy.

Sex therapy views sexual issues as being resolved by specifically addressing them, rather than by the assumption that when the individuals in a relationship work out the relationship issues, the sex will follow. Sex therapists also tend to have much greater than average knowledge about the physiological processes that are a part of human sexuality, and tend to work collaboratively with physicians to address the entirety of the causes of sexual concerns. Sex therapists generally have a vocal, and positive outlook on the beneficial influence that sexuality can have on people's lives and in the world in general.

If you are having issues with a decline in or lack of sex in your marriage and want to try resolving the issue, sex therapy is one of the most effective ways to restore a sexual relationship. You don’t have to live in a marriage where you and your partner feel dissatisfied. Advekit can help match you with a sex therapist that fits your criteria today.

Alison LaSov is a Licensed Marriage & Family Therapist with experience treating clients struggling with anxiety and depression. She predominantly focuses on mental health intervention for children and adolescents, particularly those who are in crisis. She has worked within the Los Angeles education system treating students with Individualized Education Plans (IEPs), as well as supervised a non-profit Teen Crisis Hotline out of Cedars-Sinai Hospital. Alison earned her B.A. from UCLA and M.A. from Pepperdine University. She is a native to Los Angeles and co-founder at Advekit.